“Going to Tehran: Why the United States Must Come to Terms with the Islamic Republic of Iran” 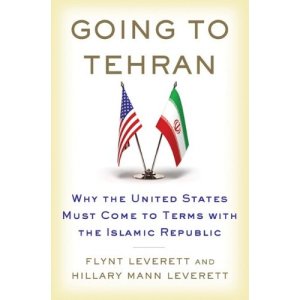 We’ve just finished the day-long symposium here at Penn State.  The event was well organized, and the hosts have been extremely kind and gracious. I thought my panel went well, and I was very impressed with Ambassador Butler. He has a true wealth of diplomatic experience, and possesses what I think to be a very fundamentally correct understanding of the NPT.  Penn State is very fortunate to have him here teaching in the School of International Affairs.

But the best thing about today, for me, was learning more about Flynt and Hillary Leverett’s new book “Going to Tehran: Why the United States Must Come to Terms with the Islamic Republic of Iran.” Reading their book and hearing both of their truly excellent presentations of their research and arguments in it, was a singular and profound thinking and learning experience for me. They are both first class scholars and intellectuals, and present their arguments in an extremely well organized, thought through, well researched and supported, and persuasive manner. Having read some of their book before I got to the conference, while I agreed on the essential thrust of the book already, there were a few points on which I was not at all sure that I agreed with them. But their discussions of their research and arguments today were persuasive, and I walk away from the conference with my mind changed on some things. That is a good day in academia. Being intellectually challenged, hearing rigorous and persuasive reasons supporting the challenge, and ultimately being persuaded to change your mind because you’ve learned something new.

I think it goes without saying, but I’ll say it anyway, that I HIGHLY recommend to readers Flynt and Hillary’s book.  It seeks to correct so many incorrect assumptions that even professor-types have about Iran, and proposes a particular approach for diplomatic rapprochement with Iran that I think is absolutely the best way forward for the US and the world.

37 Comments on ““Going to Tehran: Why the United States Must Come to Terms with the Islamic Republic of Iran””