So let’s get right into this North Korea thing . . .

Well, we all know that the rhetoric coming from North Korea has reached seemingly new heights of crazy aggressiveness over the past few weeks. This has included overt threats to preemptively attack the United States with nuclear weapons. Most analysts seem to see this as the new young leader Kim Jong-un trying to show his domestic audience, as well as to perhaps a lesser extent the international audience, that he’s a big strong man; which is kind of ironic since he bears a rather striking physical resemblance to the Stay Puft Marshmallow Man in Ghostbusters – a more apt comparison than it might first appear, given the movie plot.

Anyway, I know that a lot of analysts are saying that we’ve seen this kind of thing before, and it’s probably just bluster without any serious intention or desire to start a real physical fight with the US. I personally think, though, that the big difference between this time and previous times is that this time NK is considerably further down the technological line toward actually having a deliverable nuclear weapon with which to realistically threaten at least Japan and South Korea, if not the US itself.

I know that estimates of NK’s technological capability differ, and I can’t credibly comment on them. Though I did see this story about a rather embarrassing reveal of a DIA analysis. If it’s true that North Korea has achieved the capability to put a nuclear warhead on a missile, this is a game changer in my view. And even if they haven’t yet, the amount of time left before they acquire this capability seems to be shrinking quickly.

Julian Ku over at Opinio Juris asks the sort of obvious next question in this post:  Should the US bomb North Korea before it launches its missile?

I’ve written about North Korea and how much it concerns me – much more than Iran – a number of times on this blog. I think the current situation is extremely worrisome and dangerous. It’s the kind of situation in which misjudgments could be made on either side that could lead to open military conflict. I think this is especially true with the callow Kim Jong Un in charge in NK.

I often criticize US officials when they say that Iran’s possession of a nuclear weapon is unacceptable. Of course, in the case of NK we are way beyond that point now. NK has nuclear weapons, we know that. And we know they have long range missiles capable, or nearly capable, of reaching the US. It is only a matter of time before they progress development of both, and put the two together to have a weapon capable of striking both Japan and the US.  Also unlike the Iranian case, I have no confidence – zero – in the rationality and prudence of decisionmaking by NK officials. I think they are incredibly unpredictable, and are just genuinely nuts. This regime possessing nuclear weapons capable of striking Japan or the US is, in my opinion, absolutely unacceptable.

What do I mean by that? I’m still trying to think it through. I know what an ugly mess it would be to actually engage in military force against North Korea to forcibly disarm it of its nuclear weapons stockpile, and stop its development programs. I know the proximity of Seoul, and the presence of thousands of US troops around the DMZ. My uncle and his family live in Seoul. So it’s not something that I would want done unless absolutely necessary. I’m not a military planner, so I don’t know exactly how it would all work out. But I’m sure there are no good options for such a campaign.

But on the other hand, I do not want to live in a world in which North Korea has nuclear weapons deliverable at its psychotic whim against the US. Again, this isn’t Iraq 2003. This isn’t Iran 2013. This is a country that we know has nuclear weapons, and that we know is closing in on the capacity to deliver them against the US. And the rhetoric, whether to be believed 100% or not, is just not something I think we can ignore.

Where, then, is the “red line” here? Where is the point at which it will be necessary for the US and South Korea to take the extreme step of preemptively attacking North Korea? I don’t know, but I think it’s coming soon.  And if/when it does, I think it will be both legal under international law, and morally justifiable. I agree with Julian Ku’s legal analysis generally, and while of course the principles of the jus in bello would have to additionally be met (most importantly proportionality and discrimination), I think North Korea presents the strongest case we have ever seen for the satisfaction of the Caroline criteria for anticipatory self-defense in the jus ad bellum. In this case I unfortunately see few other realistic options. 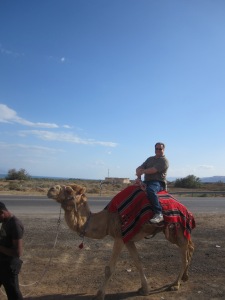 Sorry I’ve been so quiet lately. I was travelling abroad for the past two weeks or so.  I first went to Jerusalem, where I was invited to give an International Law Forum presentation by colleagues at Hebrew University Faculty of Law.  My sincere thanks to Dean Yuval Shany, Moshe Hirsch, Shai Dothan, Eitan Barak, and Robbie Sabel for this invitation and for the exceptional hospitality I was shown by these colleagues and friends. I gave my presentation on Iran’s nuclear program and international law. Readers of this blog will know that my legal conclusion is that Iran has been essentially correct in its legal arguments concerning interpretation of the NPT and IAEA legal sources, and the role and mandate of the IAEA, in the context of Iran’s case.  You can imagine that I was a bit nervous about presenting this conclusion and supporting analysis in Israel, but I also thought it would be invaluable to receive the critique of those who care most in the world about this issue.  However, I had no cause for anxiety. The participants in the forum were of the highest professional quality and character, and were open minded as well as rigorously though reasonably critical. The discussion was one of the most productive I have ever had with a group of colleagues on this topic. So again, I am grateful for the hospitality and welcome I received from colleagues at Hebrew University, and for their extremely useful feedback on my presentation.

I was also shown great kindness and hospitality by Aharon and Elika Barak. Aharon Barak was of course the former President of the Supreme Court of Israel. He and his wife Elika, who was previously the Vice President of the National Labor Court of Israel, have visited the University of Alabama Law School several times over the past few years. This has been an enormous privilege for us here. They are both wonderful people, and monumental legal figures in Israel. I simply cannot say enough in praise of Aharon Barak in particular, and his role as a member, and ultimately President, of the Israeli Supreme Court. I encourage everyone to read his seminal cases on torture, targeted killings, and the security wall in the West Bank, as well as his books, including his recent work on proportionality.  I don’t always agree 100% with his analysis, but it is always profound, and he has overall been a tremendous force in support of international law in Israel. He is a personal legal hero of mine for all that he has accomplished, and for his exemplary humanitarian character.

While in Jerusalem, I also had an amazing experience touring around the city. Those who have been to Jerusalem know what I mean. Like nowhere else in the world.

From Jerusalem, I travelled to Stockholm, for a conference organized jointly by the University of Amsterdam Faculty of Law, and the National Defense College of Sweden, with Andre Nollkemper of Amsterdam as the principal. This was a really fascinating conference on the topic of shared responsibility in international law.  My assigned topic was the potential use of a theory of shared, or collective, responsibility of states in the area of arms control. I think this theory is potentially very useful and parsimonious in the arms control area. My paper will appear as a chapter in a book to be edited by Andre Nollkaemper. The participants in this meeting were first rate.

Anyway, I’m back now and will try to catch up some with the arms control law news and events. Obviously the biggest occurrence over the past two weeks was the adoption of the Arms Trade Treaty by the U.N. General Assembly. Unfortunately, we haven’t been able to feature any posts on this topic here at ACL. But there has been some excellent analysis and commentary elsewhere. Here are a few posts on topic that I’ve seen around the web: